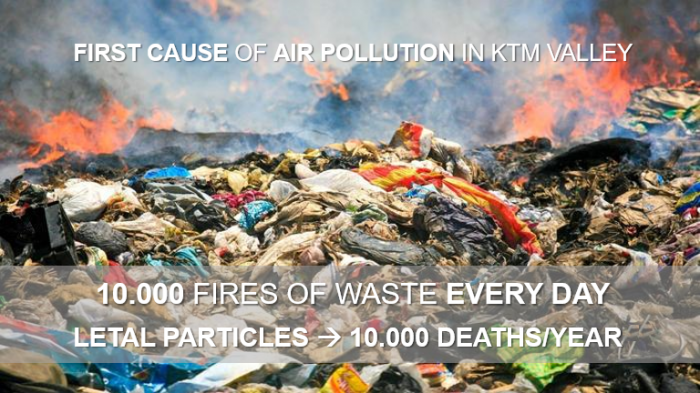 The waste management in Kathmandu Valley is very poor and need help. Just having a walk you can see waste everywhere: in rivers, bridges, fields and the street, and is common to see people burning it.

Fulbari Waste 3R is a company that aims to aware population of waste concern and trying to collect as much waste as their resources allow from their area: Balkot, Thimi and Dadikot. The short term plan is to install large containers in main streets, and collect waste from these containers, as well as door to door.

Kathmandu Valley is growing year by year and the pollution and waste is increasing to unsustainable levels. The 10.000 small fires of waste done every day in the Valley is the first cause of air pollution, which is killing almost 10.000 every year. There are no containers on the streets and just some households pay the membership for collecting the waste. The rest of them throw the waste to the river or just burn it.

Some people would like to segregate the waste and recycle it, but as there is no infrastructure to do so they just put all the waste (organic, recycling, landfill) in the same plastic bag and throw it away.

Fulbari Waste 3R is committed to change the habits of the population by doing awareness programs in schools (see attached presentation), with leaflets and door to door advices. They also want to provide 2 small containers for every households which are members to start segregating from their houses and therefore segregation will be much efficient.

Fulbari Waste 3R is also committed to do a monthly campaign to clean some areas which are especially affected by the waste, like river bridges, highways or some fields.

For this first crowdfunding, we need to place 5 large containers in the 5 bridges of the area, where population is used to throw garbage to the river. As everybody crosses the bridges, they will also aware of the situation. These containers will be fixed to the ground with cement and the metallic structure will be robust enough to avoid vandalism and be resistant for long term usage.

Advertisements on the top of the containers will allow Fulbari to install more containers in the future and maintain the current ones.